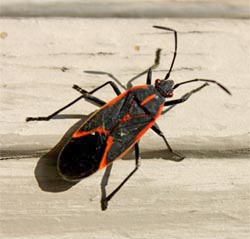 Boxelder bugs(Boisea trivittatus, Family Rhopalidae, scentless plant bugs) are common insects from mid-summer through fall, and sometimes in spring. The gray and red adults are about ½ inch long. Nymphs (immatures) are bright red with darker heads and look like the adults, but without developed wings. They tend to be most abundant after summers when we have had a very warm May and a dry July, but their numbers also vary a lot from place to place regardless of the previous months’ weather. 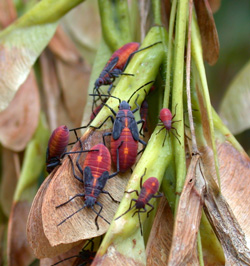 After the bugs emerge from overwintering sites in the spring, females deposit small, red eggs on host plants. The nymphs hatch in 10 to 14 days. During the summer they are found primarily on female boxelder trees (Acer negundo) where they feed by sucking plant sap from leaves and developing seeds. They can be found on other plants, such as ash, maple and occasionally on strawberries, grasses, and various other plants, but normally cannot complete their development on these other plants. 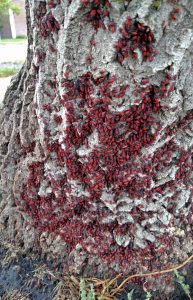 They rarely cause significant damage to any plants. Nymphs mature into adults by mid-summer, and these adults lay eggs for a second generation. The adults that develop from these eggs leave the trees to find places to spend the winter. They continue to be active late into the fall and are often seen congregating in sunny spots on the south sides of buildings, trees and rocks on warm afternoons.

In their search for a nice hiding place to spend the winter, boxelder bugs often end up inside our homes. Boxelder bugs like sunny areas and are attracted to buildings with a lot of southern exposure – regardless of the color. They enter buildings through small gaps around windows, doors, and 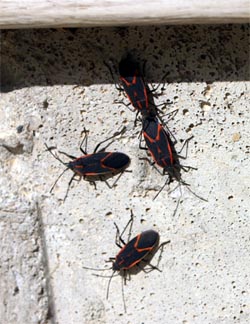 pipes and through small cracks in the foundation or siding. They often gather in large congregations on walls or foundations when seeking entry.

As long as the bugs remain cold within walls or attics, they are inactive. But should they be warmed up by the furnace or sunshine, they become active and may crawl into the rooms. Although they do not feed or reproduce inside the home, boxelder bugs may stain curtains and walls. They will not bite humans or pets, and they do not damage food or other items in the home. However, their mere presence certainly can be a nuisance.

What to Do About Boxelder Bugs
Removing boxelder trees or spraying heavily infested trees with a registered insecticide in mid-summer may help reduce boxelder bug numbers. Also, remove any accumulations of boxelder, ash, elm and maple seeds since the bugs can feed and reproduce on these, as well as on trees. However, the adults are good fliers, and can move a considerable distance from host trees, so this will not eliminate boxelder bug problems. Choose species other than boxelder when planting shade trees. 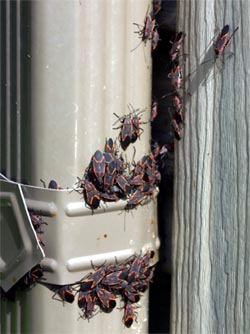 The best means of preventing problems with boxelder bugs is to prevent entry into your home. If you’ve been invaded 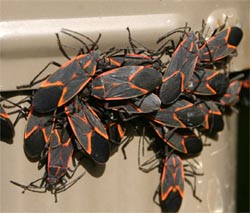 by boxelder bugs (or other insects) in the past, try to seal up all possible entry spots. Caulk all openings around windows and doors and in walls, siding or foundations.
Clusters of bugs on the sides of buildings can be sprayed with registered insecticides, insecticidal soap or hot, soapy water. Sprays may need to be repeated as more boxelder bugs arrive, especially when using soapy water.
Once inside, the best method of control is to suck up the occasional bug with a vacuum cleaner. Insecticides sprays are generally not recommended for boxelder bugs that have already made their way indoors.
– Susan Mahr, University of Wisconsin – Madison