You may have noticed some larger hornets in the Wisconsin area lately which may be confused with the Asian Giant Hornet.

Historically, the UW Insect Diagnostic Lab receives many suspected reports of Asian giant hornets every year – look-alikes to the Asian Giant Hornet include the following:
Lately, here in the La Crosse County Office, we are getting many questions, and submissions of insects for identification by our our Agriculture Educator, Kaitlyn Davis. Most of these submissions have been the Cicada Killer Wasp (which have become very common in the southern half of Wisconsin.) The Cicada Killer Wasps may be confused with the Asian Giant Hornet – but as you can see in the photo below, along with other Look-Alikes found in Wisconsin, they are similar but not the same. 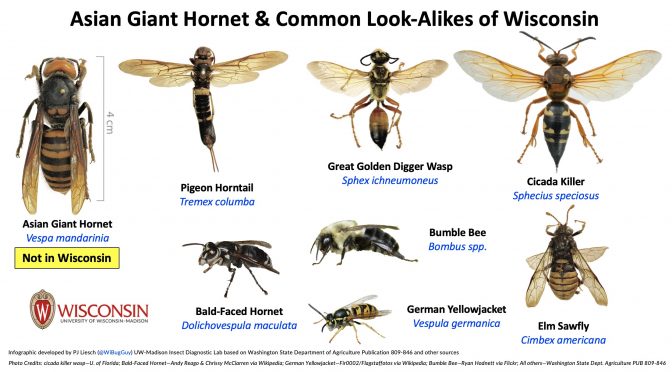 The Cicada Killer Wasps are solitary wasps and up to 1½ inches long in size, and their black and yellow coloring makes them look like giant yellow jackets. Adult cicada killer wasps appear from mid-July until early September.  Males are territorial and often patrol a specific area in the landscape.  Adults dig burrows in areas with bare ground (such as flower beds), or under shrubs.  Burrows are ½ inch in diameter and up to 10 inches deep.  Female cicada killer wasps locate cicadas and paralyze them by stinging them. They place one or two paralyzed cicadas in each burrow that they dig, and deposit an egg on one paralyzed cicada per burrow.  Cicada killer wasp larvae develop without adult help. (Information sourced from https://hort.extension.wisc.edu/articles/cicada-killer-wasps/).

Solitary wasps such as cicada killer wasps are non-aggressive by nature.  Male wasps cannot sting, and in general, female wasps will only sting if handled.  Because cicada killer wasps dig burrows in loose, exposed soils, discourage their activity by using mulch or landscape fabric in areas where they are active.  If you must treat, put insecticide dusts or granules containing carbaryl, cyfluthrin, deltamethrin or permethrin down any active burrows.  These dusts will kill the wasps as they enter or exit a burrow. (Information sourced from https://hort.extension.wisc.edu/articles/cicada-killer-wasps/).

If you have an insect you would like identified, you can email a high-quality photo to uwexmail@lacrossecounty.org, or bring the insect into our office (212 6th Street North Suite 2200, La Crosse WI 54601). To preserve an insect, try to capture and bring it to our office alive if possible. Keeping the insect preserved (not squished) makes for an easier identification! If we are unable to identify the insect we can send it to be identified at the UW Insect Diagnostic Lab for a fee of $5.

Sources (and great further information) include:

Feedback, questions or accessibility issues: info@extension.wisc.edu | © 2023 The Board of Regents of the University of Wisconsin System
Privacy Policy | Non-Discrimination Policy & How to File a Complaint | Disability Accommodation Requests