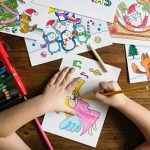 Ron Ferguson, an economist at Harvard, has made a career out of studying the achievement gap — the well-documented learning gap that exists between kids of different races and socioeconomic statuses.

But even he was surprised to discover that gap visible with “stark differences” by just age 2, meaning “kids aren’t halfway to kindergarten and they’re already well behind their peers.”

And yet, there’s a whole body of research on how caregivers can encourage brain development before a child starts any formal learning. It’s another example, Ferguson says, of the disconnect between research and practice. So he set out to translate the research into five simple and free ways adults can help their little ones.

“Things that we need to do with infants and toddlers are not things that cost a lot of money,” he explains. “It’s really about interacting with them, being responsive to them.”

He calls his list the Boston Basics, and he’s on a mission to introduce it to caretakers first in Boston and then across the country.

So how do these five principles get into the hands — and ultimately the brains — of Boston’s babies?

Ferguson and his team decided the Basics have to go where the parents are. They’re partnering with hospitals to incorporate the five principles into prenatal care and pediatrician visits. They work with social services agencies, home-visiting programs, barbershops and local businesses. Ferguson even teamed up with a local church to deliver a handful of talks at the pulpit after Sunday services.

Tara Register runs a group for teen moms at the Full Life Gospel Center in Boston. She says when she learned about the Basics, she thought, “This would be the perfect place. We’ve got these young moms learning how to parent and trying to figure this out.”

Register wishes she had known about the five principles back when she was a teen mom. Years later, she’s now helping get the word out to a new generation. She says when she talks about the Basics in her group, the teenage parents are surprised to discover that so much learning happens so early. “Some of this stuff they’re probably doing already and they didn’t even know there was a name behind it or development behind it.”

And that’s true for most caregivers. A lot of this comes naturally; the key is to connect those natural instincts to what researchers know about developmental science — something all parents can learn from, Ferguson says. “I have a Ph.D. and my wife has a master’s degree, but I know there are Boston Basics that we did not do.”

Back in Register’s class, she holds one of the babies and points to his head — and the developing brain inside. “You can’t imagine how much of a sponge this is right here,” she says. The teens brainstorm ways they’ll incorporate the Basics into their daily routine. “I’ll narrate what I’m doing as I get ready for work,” one suggests. “I’ll count out the number on his plaything,” another offers.

As Register wraps up her lesson, she has one final thought for the group, which she repeats several times. It’s essentially the thesis behind all five of the Boston Basics: “Our babies are incredible,” she tells the new moms. “They are complex, they are incredible, they are smart. They can take it all in. So don’t underestimate them.”