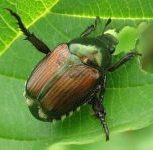 Just about the time the rose chafer numbers are declining due to their life cycle the Japanese beetles show up in force… this past mild winter allowed higher numbers of insects than usual to make it through to this year.

Japanese beetles typically show up in early July, and by the number of phone calls and e-mails to the office it appears we have a bumper crop this year. Some people unintentionally call the Asian lady beetles we despise in the fall Japanese beetles, but true Japanese beetles are broadly oval and about 3/8th inch long with a bright emerald green head and prothorax (the area directly behind the head) and shiny bronze colored wing covers. An important distinguishing feature are the five small white tufts of hair along each side of the abdomen and two larger white tufts on the tip of the abdomen. You can google search for Japanese beetles to see pictures of them.

Japanese beetle adults feed on over 300 different plants, commonly eating the foliage of rose, grape, linden, birch, crab apple, cherry, birch, Norway maple, mountain ash, and willow. They skeletonize the foliage, eating the leaf tissue between the veins. They particularly like to feed on plants in sunny areas and typically will start eating leaves at the top of plants and work their way down. The adults also commonly eat flower blossoms, and they will also damage fruit. Japanese beetle grubs are also pests feeding on the roots of turf grass, and occasionally cause enough damage to warrant control in the lawn.

There are a variety of residual garden insecticides that you can spray on the leaves of plants, including carabaryl and pyrethroids such as bifenthrin, cyfluthrin, lambda-cyhalothrin, or permethrin. Repeat applications may be necessary, especially if large numbers are present. Most of these insecticides will last around 10 to 14 days, less if there is heavy rain, and at that time you can watch for beetle activity and re-apply if necessary.

To be pollinator friendly it is best to apply insecticides the last half hour of light during the day after the bees have returned to their nests and hives. By the time the pollinators return to forage the next day the insecticide should be dried on to the plants and lower risk of killing the pollinators. Do not use dusts as they do not dry onto the plants and the pollinators will unintentionally take them back to the hives and nests on their bodies.  Read the labels as several insecticides are not to be used on plants when they are flowering. As when using any pesticides always follow the label for rates and safety requirements.

There are a couple of systemic insecticides available to home gardeners, imidacloprid and Safari (dinotefuran). If you are treating trees and shrubs, there will be some lag time (days or weeks) while the product moves up the plant. However, these insecticides are generally long lasting and should only require one treatment during the summer. There has been concern recently about imidacloprid adversely affecting pollinating bees so it would be best to avoid treating plants that are attractive to bees. They are not labeled for fruiting crops or vegetables and due to the long lag time before they are effective, they would not be a good choice at this time of the year.